Hello Friends!
♥
We had our first frost last night.  This morning the house was freezing!  Resisting the urge to turn the heat on so early in the season, I wandered around my kitchen wearing an old cardigan sweater and wrapped in a fleece blanket.  I have to admit it felt good to be cozy. My coffee tasted just a little bit better this morning.
The days are getting very chilly now.  It's windy and blustery.  I feel my sense of nesting kicking in.  It's dark when I wake up in the morning and every day it's harder and harder to get out the door.  Do I have to face the world today? Really? I would just rather stay home and watch old movies  : )
"Autumn...the year's last, loveliest smile."
-William Cullen Bryant
Friday John was home sick with a fever. I took the day off from work to stay home with him.  He rested on the couch for most of the day watching the Disney Channel and I took the opportunity to make something I have been craving for weeks.  Butternut squash soup.
I was looking at recipes online and I found one that had apple it.  It sounded really good so I gave it a try.  It was delicious!  The apple sweetened the soup just a little, but not too much.
I think you would really like it..... ♥ 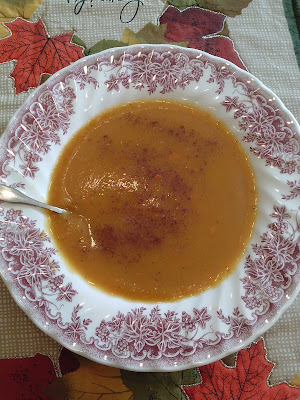 Heat a large thick-bottomed pot on medium-high heat.  Melt the butter in the pot and let it foam up and recede.  Add the onion, carrot, and celery.  Sauté for 5 minutes.  Lower the heat if the veggies begin to brown.

Add the butternut squash, apple, broth, and water.  Bring to a boil.  Reduce to simmer, cover, and simmer for 30 minutes or until the squash and carrots have softened.

Add pinches of nutmeg, cinnamon, and cayenne.  Add salt & pepper to taste.
**I don't have an immersion blender so I did batches in my food processor and it came out great.  I also had two cloves of left over roasted garlic in my fridge that I threw in.  I come from the soup school of a little of this and a little of that - just throw in what you like....and that's what I did** 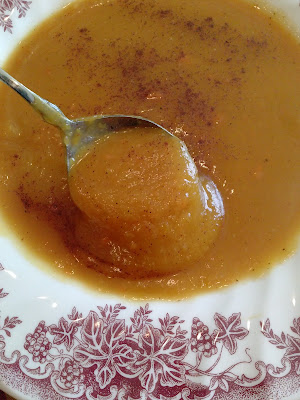 This is "autumn in New England" in a bowl.  I added an extra dash of cinnamon on top before serving.
So good and warmed us to the bones.  Too bad John doesn't like squash.
I keep trying but it's a NO GO every time : (
When he's sick the only thing he asks for is good old fashioned Campbell's Chicken Noodle soup.
It works every time.  I can't say I blame him.
I love it too~
"Autumn sings of freedom and new beginnings.  Even the leaves have put on their richest gowns to dance freely and giddily into the unknown."
-Clair Perkins 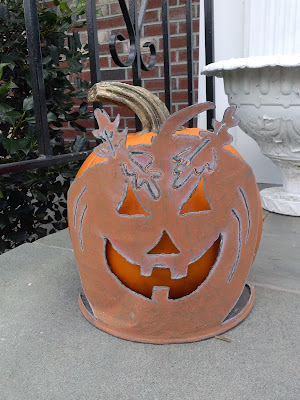 We haven't reached our peak with foliage yet, but it's coming.  Some of the leaves are already starting to fall off the trees.  Walking around my yard in the morning I like seeing the contrast of colors.  Pretty soon they will all be bright orange ♥  I got yellow mums and a big, fat pumpkin for the front steps.
"October's poplars are flaming torches lighting the way to winter."
-Nova S. Blair 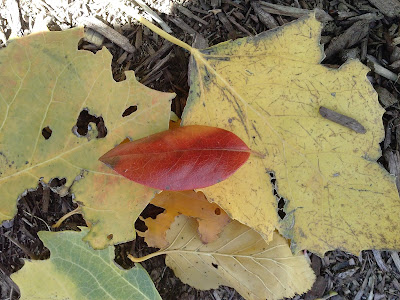 Have you read Susan Branch's The Fairy Tale Girl yet? Anyone that knows me knows how much I adore her.  She's been a part of my life for at least twenty years.  In her new book she tells the story of her life, taken from diaries she's kept all her life.  As a true fan of Susan's, this book answered so many questions for me. I started crying on page 14 and continued up until the end.  She's so relatable and I see myself in many ways.  I cried for sadness and for happiness.
It was an emotional ride ♥
"Life starts all over again when it gets crisp in the Fall".
-F. Scott Fitzgerald 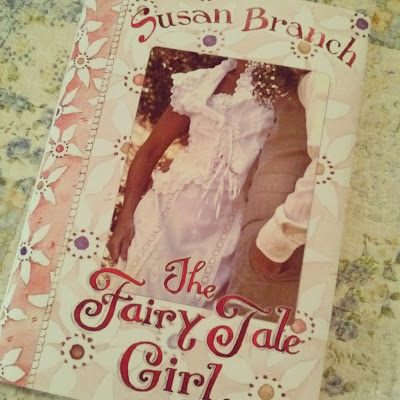 For two nights in a row I was up until three o'clock in the morning reading.  I wanted it to last, but I couldn't read it fast enough.  The book ends in 1982 when Susan moves to Martha's Vineyard.  Part 2 called Martha's Vineyard, Isle of Dreams is coming out next year, where she continues her journey.  It's like waiting for the final season of Downton Abbey.  I want it to come, but I want it to last forever.  I didn't think it was possible, but I love her even more for sharing her story with all of us.  She's such an inspiration to me.
The morning after I finished the book I tweeted her and within 5 minutes she replied back to me.  Because she's awesome.
♥ 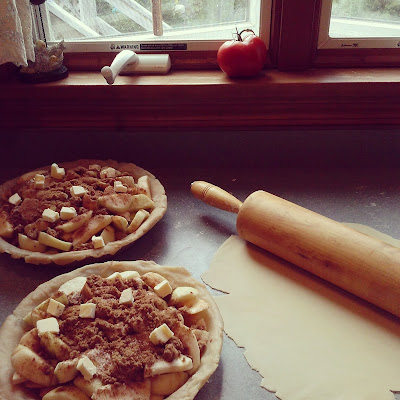 And when I'm not reading I've been pie making.  The apples have been delicious this year.  We are  pie people in my family and I somehow inherited my grandmother's knack for making pie crust.  Whenever I send one over my parent's house my Dad gives me the clean pie plate back asking for a refill.  I also have two in the freezer, ready to be baked for the holidays.  I feel like I've got my act together when I have pies on hand ♥
And by the way....thank you so much to all of my friends who have been asking about my mom.  She's feeling much better and appreciates all of your prayers! xo
"Every leaf speaks bliss to me, fluttering from the autumn tree."
-Emily Bronte 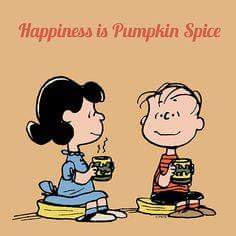 yes, it is : )
Have a great week, girlfriends!   Halloween is less than two weeks away.
The month is flying by!!!
Have a cup of pumpkin spice anything and enjoy it~
xoxo
"Autumn carries more gold in it's pocket than all the other seasons."
-Jim Bishop
Posted by Danielle's Sweets at 11:55 PM