Elvis has left the building....♥

The kids make up their own acts, pick their own music, and provide their own costumes.

It's so much fun to see the children's creativity shine in their performances! 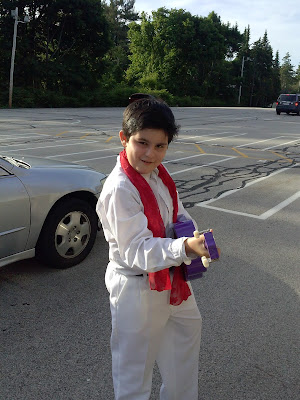 
He did his best Elvis impersonation to Heartbreak Hotel!

(I don't think the walls of St. Francis Xavier School have ever seen such a thing : )

And then he and his best friend Jack did the Abbot & Costello "Who's on First?" skit.

They learned their lines word for word and rehearsed every day at recess for over a month.

Their performance was perfect!

I was so proud of both of them!

There were over 50 kids in the show and each one shined like a star!

Seeing this made my WEEK and John has been bopping around the house singing since last night.

A great way to end the school year! ♥

Doesn't this just put a smile on your face?