Guys, tomorrow is Halloween! Are you ready?  It's going to be a chilly 52 degrees here, but no rain so our trick or treaters will be nice and dry.  For the past several years we've been invited to trick or treat with some of John's school friends in their neighborhood.  It's so much fun! My friend Courtney puts on an awesome spread of hot chocolate and cookies on her front porch before we go, and honestly...that's my favorite part ♥

But before we go Trick or Treating....

...I thought I would share with you a favorite apple recipe of mine since it IS still apple season (actually, isn't it always apple season? :)

I made this cake for the first time a couple of years ago and I fell in love with it.  I used a cast iron skillet but a glass baking dish works just as well! This cake is perfect with your tea or coffee and served warm will fill you with utter JOY on a cold day, especially if you a fighting a touch of a cold like me. 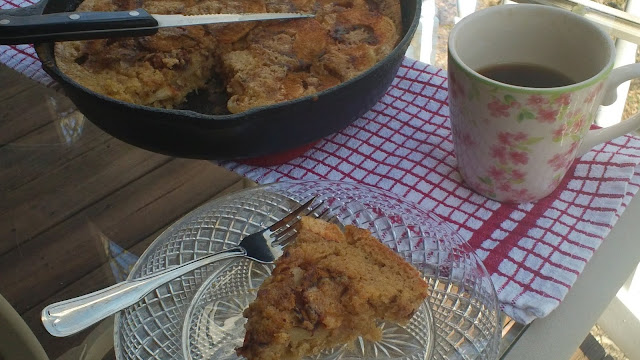 recipe adapted from Joy the Baker

Grease and flour the bottom and sides of an 8 or 9 inch cast iron skillet (or other oven proof dish or cake pan).

In a medium bowl whisk together flour, baking powder, baking soda, cinnamon, and salt. Set aside.

In the bowl of an electric mixer, beat together butter and sugar until light and fluffy, about 3 minutes.  Add egg and yolk, one at a time, beating for one minute between each addition.

With the mixer on low, add half of the flour mixture.  Add the buttermilk and when the flour is just combined with the butter mixture, add the remaining flour.  Beat on low until all of the flour has been incorporated.

Spoon batter into the pan and spread evenly.  Top with the sliced apples and cinnamon & sugar.  Bake for 25 - 30 minutes, or until a knife inserted in the center of the cake comes out clean. 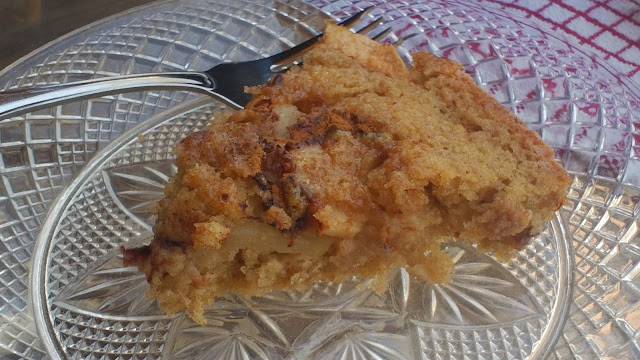 WAIT! Where's the whip cream! What was I thinking? ♥ 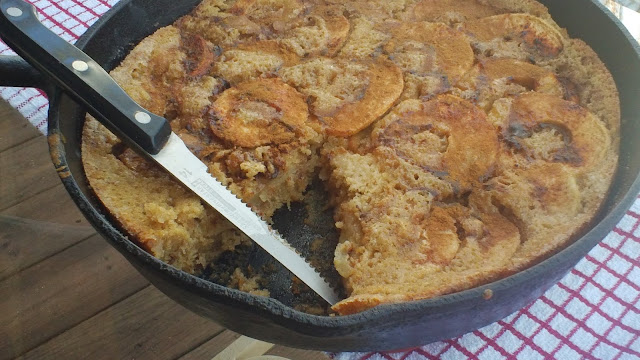 Either way, it's really delicious! I hope you try it and use up all the yummy apples of the season. 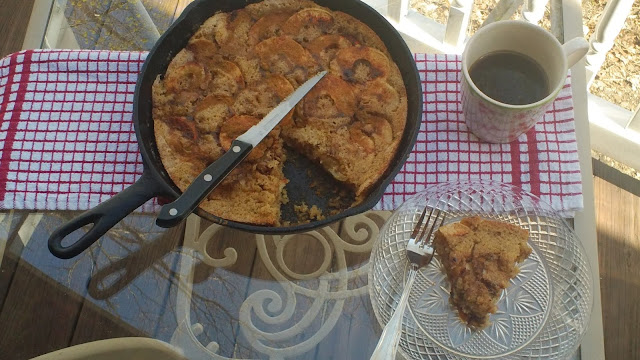 Well, the cake is ready, pumpkins are carved, and John has his costume.  He's bringing back and oldie but goodie and going as a slice of bacon again this year!  I'll be back on Friday with pictures : )

Have a very happy and safe Halloween!

Enjoy your festivities, even if it's just cozying up on the couch watching a scary movie!

Boo!!!!! (and please save me a Three Musketeers Bar cause they're my favorite ♥)